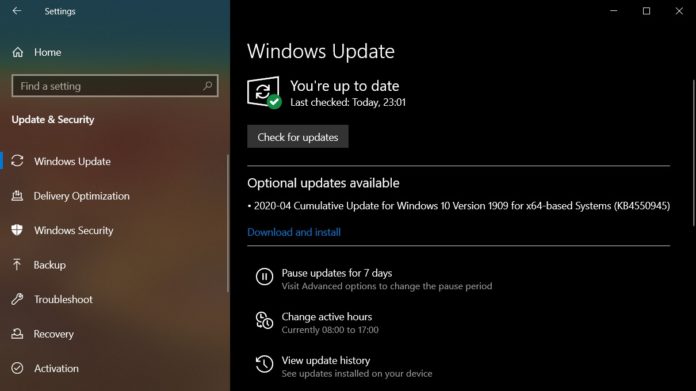 Windows 10 KB4550945 has been released to both consumers and enterprises as an ‘optional’ update.

Like every optional update, KB4550945 won’t be installed automatically. However, you can always download offline installers of Windows 10 KB4550945 (Build 18363.815) and manually install the update.

Many users certainly know that installing a new cumulative update via Windows Update is likely to fail or end up causing various issues on a device. If you’re confident that Windows Update will not fail, you can grab this patch by checking for updates as you normally do.

For those who manually wish to patch their machines, you can download Windows 10 Build 18363.815 (KB4550945) offline installers from Microsoft Update Catalog, which is the recommended platform by experts for the standalone package of each update.

This should allow you to download Windows 10 update’s offline package for both 64-bit and 32-bit systems. Also, make sure you download the version that can be installed on your device, as x64 version of the update could break your x86-powered machine.

You can double-click the .msu file to install the update or you can also use Command Prompt and prevent the operating system from restarting to finish applying the update.

If you double-click on the .msu package, Windows 10 will start the upgrade process and reboot your device. With the above steps, you can prevent Windows 10 from restarting your computer after installing the update.

To finish the installation, you will still need to manually reboot the device when you’re not actively using the device.

With Windows 10 KB4550945, Microsoft is addressing a wide range of issues including a bug that broke Windows Update service and prevented section of customers from checking for updates.

Another issue that leads to problems with Microsoft Xbox game on a Windows device has been resolved.

The other fixes and improvements are for enterprises, but as always, you’ll might notice general performance improvements after deploying this optional cumulative update.